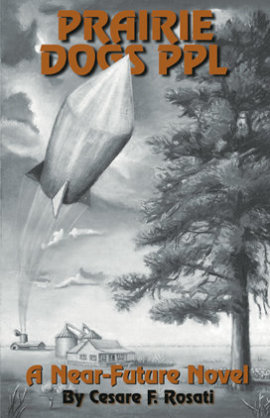 Contrary to visions conjured up by the title this novel is neither a western nor a story about a small town in mid-America. Rather, it tells a tale of the scientific and business development of a new space launch technology wrapped in political intrigue.

As a feisty entrepreneur takes on the military-industrial complex (MICs) in court in order to open up the space launch business to purely civilian firms, a surprise player, the BTP Corporation, quietly awaits the Supreme Court’s decision on the case. Under the leadership of its President and CEO, Christopher Brock, BTP has spent decades on a secret project that rocks the establishment within days of the Supreme Court decision.

The ‘present’ in the book is the year 2012. It is a typical election year, with the all-powerful MICs contributing heavily to the re-election campaign of the incumbent president. Following the court’s decision, and the announcement by the BTP Corp., the Administration and its allies scramble to deal with the fallout. In so doing, they reveal the convoluted, and often petty interagency processes that lead to governmental policy. The interactions among elected officials, the entrenched bureaucracy, an incendiary news media and the industrial lobbyists create a lively, vivid, and highly-charged political thriller.

Perhaps most surprising in this novel is the quality of the dialogue. Constructing casual, conversational dialogue is difficult. Not so for this author, who crafts dialogue that is true to his characters and enjoyable to read. Interestingly, it is primarily the dialogue that carries the story. Descriptors are used sparingly; sufficient to set the stage and add context, but never so detailed as to slow the action.

Without alien invaders and far-out science, it is the realistic application of existing technologies that pushes the highly-believable story into the near-future.

Eleven days in the year 2012 propel us through the streets and inner offices of Washington, D.C. When an aggressive Washington Post reporter reveals a secret meeting with Supreme Court Justices, the Hennessey Administration’s re-election campaign implodes. Higher ups at Justice and the NSC square off; the all-powerful MICs fight to retain their lucrative control of US satellite launches; and an unexpected player surprises them all. Standing apart from politics, Christopher Brock and his BTP Corporation energize Cesare Rosati’s dramatic glimpse into the near future. A must read from an exciting new author.
--- Harriet Freiberger, author of Lucien Maxwell, Villain or Visionary

Political intrigue, entrenched military industrialists, judicial chicanery and, of course, the media, rock Washington, DC in the year 2012 when a court decision is handed down in favor of private space launches. The fight is on to keep the status quo, but a small, upstart corporation bursts out of secrecy with a new technology set to leave them all behind. Told in a conversational style, this intriguing blend of political thriller with science fiction provides a fascinating journey into the near future that is not to be missed.
--- Kathleen Cunningham Guler, author of In the Shadow of Dragons