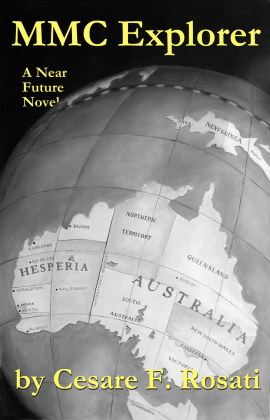 Move over Isaak Asimov, Ray Bradbury and Frank Herbert. Make room for a

fourth at the table. Cesare Rosati has earned a seat. His dream of habitation and

commerce beyond Earth's boundaries continues -- complete with high-tech and

good guys. As always, he transports the present seamlessly into the not too distant future.

There's a fertile mind at work here. Enjoy the richness of its harvest.

---Graydon Dee Hubbard, author of Charlie's Pride and Slim to None

In 2071, Adriana, the first permanent self-sustaining colony in space, no longer orbits earth.  It has moved to a new location called L5.  A UN treaty delineates the moon’s surface into Near Side (Earth’s) and Far-Side (Adriana’s).  Ongoing animosity has prevented any official contact between their respective settlements – until now.  The promise – or threat – of normalized relations between Adriana and Earth escalates when the space-pioneering Brock family instigates a realignment of Australia’s borders and , at the same time, develops an outer-space source of precious ores.  With political and economic machinations entangling Cesare Rosati’s widespread cast of characters, their too-often devious goals remain unrevealed until the final pages of this journey into the future.