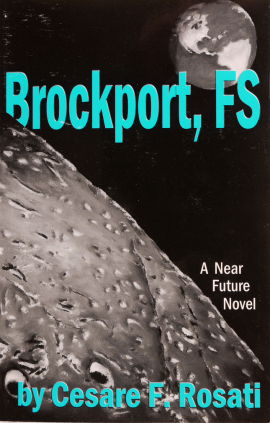 In the year 2028, the American dream reaches a new level with completion of the first space village, Adriana. The orbiting city carries the name of the woman most responsible for its construction, Adriana Brock, the visionary wife of U.S. corporate icon Christopher Brock. In this third book of Cesare Rosati's expedition into the near-feature world, the village's self-governing population seeks its place in the United Nations. Adriana’s mayor, Gina Brock Schiller, struggles against the powerful U.N. Secretary-General as well as an insidious and murderous plot by a small group of nations to thwart its successful independence. Faced with the threat of military attack from Earth, the Adrians launch a desperate and highly secretive plan to leave Earth orbit for a more secure location in space known as L5.

Readers cannot resist being fascinated by the idea that a self-supporting community not only exists, but thrives, in outer space. Political intrigue on Adriana replicates life as we know it here on earth at the beginning of the 21st century, but the successful Brock family rises above the fray to stand against the old ways. Rosati's glimpse into the future coincides with present-day construction of commercial spaceports, and the potential reality of a New Frontier.